There are numerous records of captive cetaceans being released into the wild.
Here is a table that the Free Morgan Foundation prepared showing the releases of other cetaceans (which we could find information about).

See the story of FREE WILLY (Keiko) below and that of an other called Springer. These stories give details on how the process works and what we have learned.

There are others cetaceans, which are not included in this table the Free Morgan Foundation has compiled, which have been released. But for these animals, details have not been publicized.

If you know of any such releases (or of published accounts that we have missed off our list) or if you have any unpublished data (or know where we can source that data), we would be interested in hearing from you. Please contact us. Thank you.

The True Story of Keiko & The Case for Morgan’s Release

The recent Dutch court decision involving the captive orca named Morgan has caused much consternation and discussion among marine biologists, and the public at large. In its decision, the court ruled against a proposal to rehabilitate and release Morgan and ordered her transfer to Loro Parque, an amusement park in Spain, where she will be used for captive breeding.

The court’s decision was based, in part, on its erroneous belief that Morgan’s rehabilitation was not possible and would endanger her life. In support of her release, attorneys and expert witnesses discussed the rehabilitation and release of the orca Keiko, the star of the 1993 hit film “Free Willy”. Due to court time constraints, attorneys supporting Morgan’s release were unable to present the recent documentary film, Keiko The Untold Story as evidence in support of Morgan’s release.

This is unfortunate. Keiko’s rehabilitation and return to the wild is cited by the marine park industry and the media as a failed project and is often given as the reason captive orcas should not be released. Factual errors regarding Keiko’s return to the wild abound. Even after the court’s decision, news articles about Keiko continued to mislead the public. For example, in its November 29 article entitled, “Morgan The Killer Whale Transferred from Netherlands to Spain”, the internet newspaper HuffPost Green stated:

“Real life releases have a mixed record at best, however. Keiko, the animal that starred in “Free Willy”, was released in Icelandic waters after 20 years in captivity. He died, apparently of pneumonia, after surviving two months on his own and swimming about 870 miles (1,400 kilometers) to Norway.“

In fact, Keiko lived for five years in Icelandic and Norwegian waters and survived 15 months after arriving in Norway. The “two month” period was approximately how long it took him to swim from Iceland to Norway. Likewise, The Seattle Times, in its November 29th article entitled, “Dutch Govt. Orders Whale Transfer to Spanish Zoo” stated:

“Orcas rarely have been successfully returned to the ocean after being in captivity…The most famous example was Keiko, the star of the 1993 “Free Willy” film who was caught at age 2 near Iceland and spent many years in Mexico City. After 20 years in various marine parks, Keiko was flown back to Iceland and released under lengthy supervision. He died in 2003 at age 26, apparently of pneumonia, after surviving two months on his own and swimming about 870 miles (1,400 kilometers) to Norway.”

Such accounts of Keiko’s life are misleading. Although considered an unlikely candidate for rehabilitation and release because of his length in captivity and capture at a very young age, Keiko embraced his new life in the ocean after being airlifted from his tank at the Oregon Coast Aquarium to an ocean pen in Iceland. Over the course of five years, Keiko engaged with wild orca pods and on a number of occasions left his caretakers for days at a time. When he swam from Iceland to Norway, Keiko journeyed more than 1,000 miles on his own, showed strong evidence of having fed himself and continued to thrive for 15 months after he arrived in Norway.  He spent the time from 9 September 1998 until 12 December 2003 in the ocean – that is, 1921 days (5 years, 3 months, 4 days) in the ocean, in the ocean which includes his time in the seapen, in the enclosed (netted off) bay and the open ocean and fjords.

To help clarify issues that surround the release of captive orcas, and learn about the true story of Keiko, the media and the marine park industry are urged to watch Keiko The Untold Story and engage in an open discussion of Keiko’s life before and after captivity. 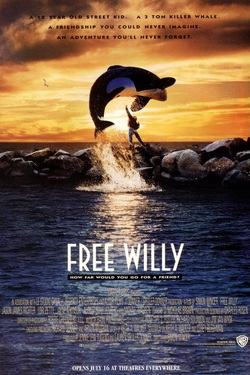 Free Willy is a 1993 American film released by Warner Bros. under its Family Entertainment label. The film stars Jason James Richter as a young boy (called “Jesse”) who befriends an orca, named “Willy”. Willy is held in captivity in abysmal conditions in an entertainment park. In the movie, Willy goes free. In real life he remained in the tank he starred in, during the film. Children from around the world created an outcry and WIlly, who’s real name was Keiko, was taken on a real journey to freedom and a life outside a concrete tank and the joy of not having to perform tricks for his meals. 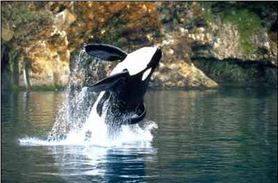 Keiko (Free Willy) breaches in his sea pen along the coast of Iceland, not long after he was moved from his concrete tank. Photo © Ingrid Visser 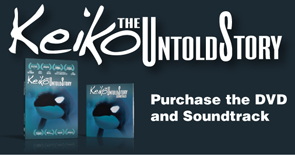 All too often Keiko’s release from captivity is cited as a failed project and the reason that other captives should not be released and yet as this film so clearly demonstrates, Keiko thrived.

This is the story that the marine mammal captive industry does not want you to know.

Keiko the Untold Story is the first in-depth cinematic look at the life and legacy of the “Free Willy” Star. The filmmaker goes behind the scenes and allows the audience inside access to Keiko’s epic journey, told by those responsible for his care throughout his journey from captivity to release in his home waters of the North Atlantic.

For every Keiko The Untold Story DVD sold from this site, the Free Morgan Foundation receives a portion of the proceeds in order to give financial assist help with Morgan’s plight at the same time educating the public about the truth regarding Keiko’s release.

Purchase the DVD and Soundtrack of “Keiko the Untold Story” and help Morgan!