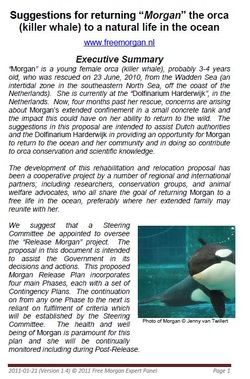 The Rehabilitation and Release Plan (complied by the Free Morgan Foundation and Expert Board with consultation to external advisors) is a detailed step-by-step plan.

It includes fall-back contingency plans and Morgan’s welfare is of the utmost priority.

It also includes a detailed step-by-step training program which will take into account Morgan’s personal progress and which will be adapted to her rate of rehabilitation.

As part of the process, Risk Analysis was carried out by experienced personnel and a detailed transport plan formulated with close consultation with veterinarians.

A sea-pen, similar to that used for Springer (a young orca with remarkable similarities to Morgan), will be also used for the rehabilitation of Morgan. Springer, like Morgan was alone, emaciated (starving) and required help. Her story of rehabilitation and release is given in the videos below. Springer has been resighted this past research season (2012), making it 10 years since her release.

Morgan’s story could have had an outcome like Springers, but instead Morgan now languishes in an ‘abusement’ park in Spain, doing tricks to earn the owners money.

Additionally, to ensure that Morgan’s release back into the wild will be successful the Free Morgan Foundation has received a pledge of financial assistance from Mr Ady Gill (please see our Supporter page for more details)

The Story of Springer, the Orca that was Rescued and Actually Released