Morgan’s Family Has Been Found Thanks to scientists, whale-watch organisations and the whale watching public, P118 was located. P118, a male who was seen with group P in 2005 in Tysfjord, Norway.

At the moment scientists are comparing the photos of both encounters to look for more members of group P.

Read more information on the recent sighting of P118.

These are the ID photos of Group P, Morgan’s extended or closely related family.

Heike Vester and Filipa Samarra identified Group P by comparing Morgan’s distinctive calls with the recent call type catalogue of wild Norwegian killer whales developed by Heike Vester, and came to the conclusion that Morgan is likely to have originated from either from group P or a group closely related to group P. You can download the full report.

If you have photos of the North Atlantic Killer Whale population or if you see NA orca in the future, please compare these ID photos with yours and if you think there is a match please report this to the Free Morgan Foundation at info@freemorgan.org

The ID photos are made by Heike Vester, who is doing research on killer whales and pilot whales in Norway. For more information about her work please go to http://www.ocean-sounds.com 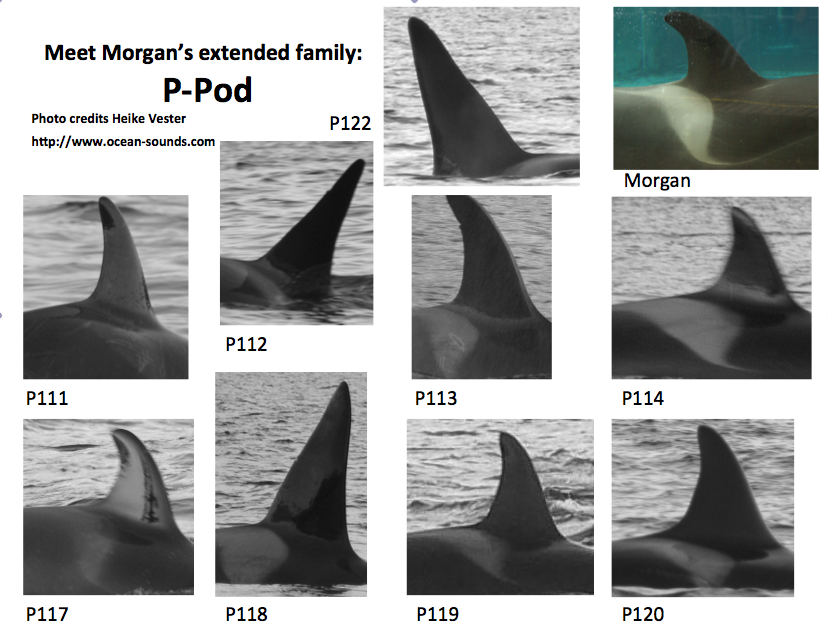