Morgan and Springer are two young female orca who’s stories have remarkable parallels, up to a point.

They were both taken (separately, in different countries) into captivity for rehabilitation and release. However, sadly for Morgan a commercial entertainment park got involved in her story. Luckily for Springer, it was a number of non-profit organisations and two Governments, who successfully returned her to to the wild. Springer was kept away from the public and fed live fish from the moment she was first captured. Morgan, who was put on public display for money, was only fed dead fish. From that point on, there was a divergence and while Springer returned to her family, Morgan remains in a tank, making money for the park owners.

Yet there is still hope for Morgan.

The captive industry is very reluctant to allow researchers to manipulate the environment of the orca, or conduct experiments that might help us learn how to return them to the wild, but occasionally studies are done which give us insights into how these animals can still be released. For instance, one study demonstrated that captive orca would still pursue, capture, and eat live fish (Newman & Markowiz, 1993). These two orca were both wild caught and were both approximately one year old when taken from their families, yet they still clearly retrained the ability to catch live fish (and the memory of how to do it). The Free Morgan Foundation has been calling for Loro Parque, who now hold Morgan to feed her live, but they have refused.

Springer Sighted in 2011 With Her Family Members 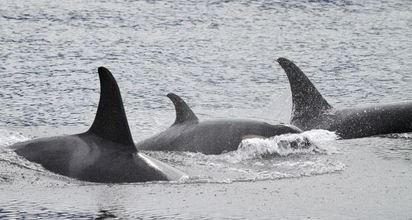 In this photo taken by Paul Spong at OrcaLab, Springer (on the far left) swims with her family in the wild, in 2011 (nine years after her release). Springer has clearly grown since her release and here accompanies A70 (Sunny) and her new calf born in 2011.

When Springer first needed help, back in 2002, she was discovered to be emaciated (starving), more than 400 km (250 miles) from her normal home range. Last seen with her mother, she was clearly now alone .

She was captured on June 12, 2002 and held in two different seapens (the first near her capture site, the second well within the range of her family group). During her time in the seapens she was rehabilitated and given medical care. She was released on 14 July 2002 and has been resighted every year since then, with the latest sighting in 2012 field season (10 years after her release).

Morgan has been bitten by the other orca at Loro Parque. This is just one photo which shows teeth marks (called rake marks when they leave a scar in a line) which have all been inflicted since Morgan was transported to Loro Parque.

The Free Morgan Foundation warned the Netherlands court and the staff of Dolfinarium Harderwjik that this outcome was likely, should Morgan be placed with the dysfunctional group of orca at Loro Parque. Sadly, that warning went unheeded and Morgan now suffers.

Loro Parque’s orca have serious social and behavioural issues. Here are just four of the many issues within the group;

These orca are all regularly put into the same tank with Morgan. The two females (Kohana and Skyla) ram Morgan hard enough to lift her out of the water, they bite and attack her and the adult male is constantly chasing her, attempting to force her into having sex.

Springer’s Rehab was a Success 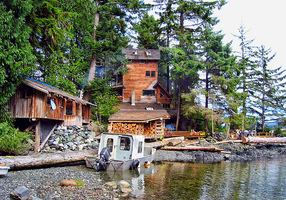 Springer’s successful reintegration back into the wild was done with help of many people and the cooperation of international bodies, Governments (USA and Canada) and NGO’s (non-governmental organisations). Key advisors on the Free Morgan Foundation Expert Board, Jeff Foster, Ken Balcomb, Howard Garrett and Bob McLaughlin were involved with Springers training and rehabilitation for release back into the wild. Paul Spong and Helena Symonds of OrcaLab (left) also advised and continue to monitor Springers progress since her return to the wild.

Springer’s story clearly shows that this is the path that should have been taken by those who captured Morgan in the Netherlands (i.e., the Dolfinarium Harderwjik). However, despite their failure to rehabilitate her and despite the fact that Morgan now languishes in abysmal conditions in Loro Parque , our team of experts who include wild orca experts, veterinarians and orca trainers, are confident that Morgan can still be released.

Help us spread the word that Springer is a very good example of how Morgan’s rehabilitation and release should have gone.

Lets make sure that Morgan’s story doesn’t become another Corky or Lolita captive orca story, where these poor individual orca have spent decades having to perform circus tricks. They will never have the chance to retire if kept in captivity in an entertainment park, as the only way captive orca ever retire is if they die.

Watch the Story of Springer’s Rehabilitation and Release